The Iron Flower by Laurie Forest 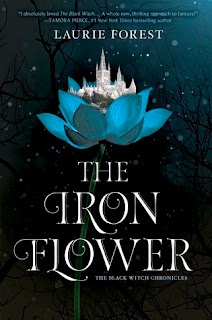 Goodreads Summary:
Elloren Gardner and her friends were only seeking to right a few wrongs, but their actions have propelled them straight into the ranks of the realm-wide Resistance against Gardnerian encroachment. As the Resistance struggles against the harsh rulings of High Priest Marcus Vogel and the Mage Council, Elloren begins to realize that none of the people she cares about will be safe if Gardneria seizes control of the Western Realm.

With tensions heating up in Verpacia, more and more Gardnerian soldiers continue to descend upon the university…led by none other than Lukas Grey, now commander of the newly rebuilt Fourth Division base. Though Elloren tries to keep him at arm’s length, Lukas is determined to wandfast to her, convinced that she has inherited her grandmother’s magic—the prophesied power of the Black Witch. As his very nearness seems to awaken a darkness inside her, Elloren finds it more and more difficult to believe that she’s truly powerless, as her uncle always claimed.


Caught between her growing feelings for the rebellious Yvan Guriel and the seductive power offered by Lukas Grey, Elloren must find a way to stay true to what she knows is right and protect everyone she loves…even if that means protecting them from herself.

My Review:
I got through The Iron Flower faster then The Black Whitch, which I didn't think was possible. I was so drawn into this world that I couldn't quit reading after I started. I was revealed when I realized the second book in this series was out. It picks up right where the Black Witch left off. The world is in a very unstable place. No where is safe for Elloren's friends anymore. The world is about to explode into war. Loyalties will be tested, friendships pushed to their limits, and loved ones will die. Which side will Elloren fall on?

Some serious stuff goes down in this book. People are out of control and because of that bad things happen. The scene where one of her friends is brutishly attacked was heart breaking. I actually cried while reading that part. It was so horrible. There were a few deaths that just rip your heart open. The true power of war is portrayed well. It is done in such a way that you truly feel for these characters. It felt so real and created vivid pictures in my mind almost as if I was watching a movie. Such great writing!

I'm not sure Elloren is in a love triangle. I think there is a definite favorite. Her aunt is pushing her to fast with Lukas and she is playing dirty. Lukas is 100% on board with fasting to Elloren. Lukas is a difficult character to read. I am honestly not sure where his loyalties lie. I think he is with the army and the Gardnerian's but, to an extent. I think Elloren is breaking through his tough outer skin. It will be interesting to see where this relationship goes in the books to come.

I still love Yvan! He is perfect for Elloren and she him. However their relationship is forbidden. They do not see a way that either of them can be together that will work. They will always be hunted because of the forbidden nature of their relationship. They do have some cute moments though. I hope that they will find a way.

I think that what this book did was show that no one is immune to war. No one is safe. But also that there are always good and innocence on both sides. Looks can be very deceiving. You need to look at whats beneath and in the hear to truly know someone. There were also a few HUGE revelations at the end that makes waiting unbearable! I am blown away by this series thus far and can not wait for the third book.