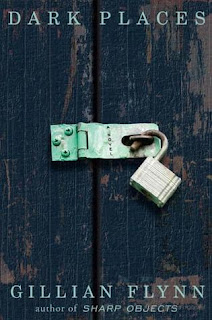 Goodreads Summary:
Libby Day was seven when her mother and two sisters were murdered in “The Satan Sacrifice" of Kinnakee, Kansas. She survived—and famously testified that her fifteen-year-old brother, Ben, was the killer. Twenty-five years later, the Kill Club—a secret secret society obsessed with notorious crimes—locates Libby and pumps her for details. They hope to discover proof that may free Ben. Libby hopes to turn a profit off her tragic history: She’ll reconnect with the players from that night and report her findings to the club—for a fee. As Libby’s search takes her from shabby Missouri strip clubs to abandoned Oklahoma tourist towns, the unimaginable truth emerges, and Libby finds herself right back where she started—on the run from a killer.


My Review:
This is the first book I have read by Gillian Flynn. I can say that I enjoyed it but, didn't love it. It was quite dark in some places, no pun intended. I didn't really like Libby until halfway through the book. She went through something horrible as a kid and it has left her with many emotional scars. She really isn't a functioning adult. She lives off the money from publicity regarding her families murder. She joins the Kill Club at first just to make money, then when things aren't adding up and more questions are raised she is interested. interested in finding out if her brother Ben really did kill her family or if it was someone else.

This book had a lot of characters in it. Like I said I didn't really enjoy Libby until about halfway through the book. The only character I enjoyed for a while was her mother. She was stuck in a hard way and was having a hard time providing for her family. Her drug addict ex-husband was useless. She had 4 kids to take care of and a failing farm. I think we can all relate to her mom in same way or another. When your life is like that it changes the kids. They are different from other kids in just the way they live. It makes them targets at school, in life.

The book jumps between the present and the past. This is necessary to get all the details of the days leading up to the murders, the murders, and after. I can honestly say I did not see the ending coming. I didn't expect the motives behind the murders to be what they were. It was truly heart breaking. Gillian Flynn definitely knows how to write about different levels/kinds of pain.

All in all I was satisfied with the ending of the book however, not sure I would read this one again. It is a movie on Netflix now. The Netflix movie is a bit watered down and less dark then the book. I LOVED Sharp Objects on HBO so I think if I do read more from Gillian Flynn that will be the one I read next.