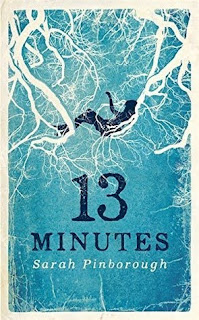 Goodreads Summary:
Natasha’s sure that her friends love her. But does that mean they didn’t try to kill her? Natasha is the most popular girl in school. So why was she pulled out of a freezing river after being dead for thirteen minutes? She doesn’t remember how she ended up in the icy water that night, but she does know this—it wasn’t an accident, and she wasn’t suicidal. Now Natasha’s two closest friends, who are usually her loyal sidekicks, are acting strangely. NAtasha turns to Becca, the best friend she dumped years before, to help her figure out the mystery. At first Becca isn’t sure that she even wants to help Natasha. But as she is drawn back into Natasha’s orbit, Becca starts putting the pieces together. As an outsider, Becca belaives she may be the only one who can uncover the truth...which is far more twisted than she ever imagined.

My Review:
This was an intense read. Becca hasn’t been in the in crowd for a while. She is ok with her life now. She has a friend in Hannah and Aiden her boyfriend. When something terrible happens to her old best friend. She is tested. Is her ex friend Tasha worthy of her help and sympathy? After renewing their friendship can they work together to figure out what happened to Tasha that dreadful night she died in the river? One thing is for sure, nothing is as it seems. Manipulation is in full effect and no one should be trusted.

I really enjoyed Becca, for the most part. Her parts of the story were my favorite to read. This book goes back and forth between a few people and sometimes diary entries and policy notes. I think that added a lot of dimension to the story and characters. Becca and Hannah were probably the only two I really liked. Tasha...I didn’t like her. The entire story I didn’t like her. She is a horrible person plain and simple. I can’t say I was surprised her “friends” did what they did. Aiden was an interesting character in the background. Hannah I truly felt for. Poor girl was innocent and caught in the crossfire.

The plot was so fun. I loved the intrigue and suspense. Can I just say that high school was bad. Social media has just added to the difficulty in the lives of young people now. I am glad I didn’t have any of that when I was growing up. Kids are absolutely brutal. Females especially. Watch out, people can be destroyed online. Becca was also caught in the middle of this crap storm. So much happened. I was satisfied with the conclusion, or what I thought was the conclusion. Then I looked and I was only at like 75% sooo yea, things get crazy fast.

Be prepared to have your mind completely blown. The end of this book will leave you realing! I finished it and was like...o...m...g. That did not just all happen. I love when a book has the ability to take me completely off guard. I was so sucked in that I couldn’t put it down. I will definely be reading more from this author.