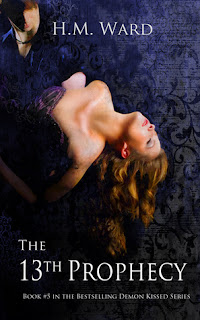 Goodreads Summary:
The time has come for Ivy to face her dark fate. There are no other options—she must destroy Kreterus. Failure to destroy him will result in the annihilation of the world we know and Ivy being doomed to reside in the Underworld for eternity.

My Review:
I have been a huge fan of the Demon Kissed series since I picked up the first book. I was kind of sad while reading The 13th Prophecy because it was the last book and I didn’t want to give up these characters. I grew to really enjoy Ivy. She was a strong character throughout the series given the obstacles she had to endure. I was excited to see Jenna Marie back again! Like I said this book was the last in the series, I don’t want to give away anything so I will be vague about the events of the book.
We get to learn more about Eric’s curse from using Satan’s Stone and it is heartbreaking. The poor man. I grew to really like Eric especially in The 13th Prophecy. I didn’t think I would especially after he was Valefar. I hoped so much that he would get a happy! You will have to read and decide for yourself if you think he did or not.
Ivy and Collin were so cute together. I truly enjoyed their relationship. It went through ups, downs, deaths. I didn’t think I could take anymore! I thought the ending fit well for the series. Life isn’t always rainbows and smiley faces. I like that the ending was different then I thought it would be. I hate it when books are predictable. I like to be on the edge up until the last pages and this book did just that. To me it seemed like a bitter sweet ending. All the characters grew so much. I am sad to give up these characters but, super excited that there is going to be a spin of series!! Assassin: Fall of the Golden Valefar will come out in the Summer of 2012!! Eeep! Perhaps I will get a glimpse at my favorite characters in that series!! Well done H.M. Ward!